White-sand beaches, mangrove-filled lagoons, cloud-piercing volcanoes and turquoise coves that once harbored pirates welcome visitors to the vibrant shores of Isabela. This seahorse-shaped isle is the largest of the Galapagos archipelago and is composed of six joined shield volcanoes, of which five are still active. Some 16 species of whales have been sighted off the west coast, so cruisers keep their eyes peeled for the telltale spouts from the likes of humpbacks and orcas. Shore excursions include lava-flow treks at the Sierra Negra Volcano—Earth’s second-largest caldera—and dinghy rides to bays filled with sea lions, reef sharks, marine iguanas, sea turtles and rays. For a glimpse into the island’s human history, a trail leads to the Wall of Tears, built in the mid-1900s by the prisoners of a penal colony. A Tortoise Center offers looks at Galapagos giant tortoises, reaching up to 475 pounds, and their latest hatchlings. 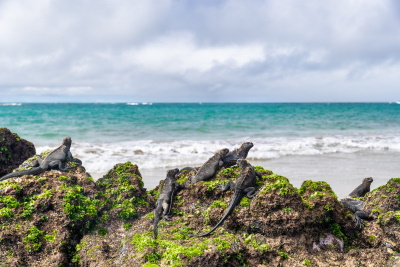 Language: Spanish
Currency: US dollar (US$)